If you want to breed Hens and Cocks you will need to build a Chicken Coop. Each hen will take around 1 real life day to lay an Egg. Be sure to leave space below the hen or it will not produce an egg. Hens will lay eggs without a cock in the Chicken Coop, but they will not be fertilized. Fertilized eggs have a white pie fraction overlain on them indicating when they will hatch into chicks. Fertilized eggs can still be turned into food, such as Fried Chicken Egg.

Chicken Coops offer an 8x8 inventory grid. Note that Hens, which take up 4 spaces (2x2), must have at least one space directly below them to lay eggs. Likewise fertilized eggs must be under the hens for them to hatch. The growth timer will stop after some time if there is no chicken above the egg. Chicks must have a 2x2 tile space, a total of 4 tiles, to mature into chickens and they will jostle themselves around to make this room when they are ready, however, if it is not available their timer will pause and they will not mature until there is enough room. Also note that, occasionally sterile eggs will still be produced even if all the above requirements are met.

A Chicken Coop has no quality and thus has no effect on the eggs and chicks produced.

(New to World 11) Chickens found in the wild can have their quality degrade while in the chicken coop. The cause is still unknown whether it be from the food they consume or from the hut.

When a new egg is laid, it's quality is based on the average of its parents quality +/-5. When it hatches the chick is initially of the same quality as its egg was. As the young chick grows, it will feed occasionally. If during any of these feedings fodder and water quality's average is lower than that of said chick, then the chick's quality will drop by some increment. Chicks never grow in quality and mature chickens never change theirs.

Caring for your Chickens

Chickens require feeding and watering and Chicken Coops have space inside for this. To fill them, have fodder material (listed below) in your inventory, then lift it up with a left-click and right-click on the coop. This will fill the fodder bar a bit. You will not be able to recover any seed or plants used in this manner. Fodder and water each fill up their own meter inside the coop. As the chickens eat, the amounts that will be diminished are proportionate to the number of chickens contained therein.

Plants that could be used as fodder:

A Chicken Coop can be built, generally on a 2x2 paved area. 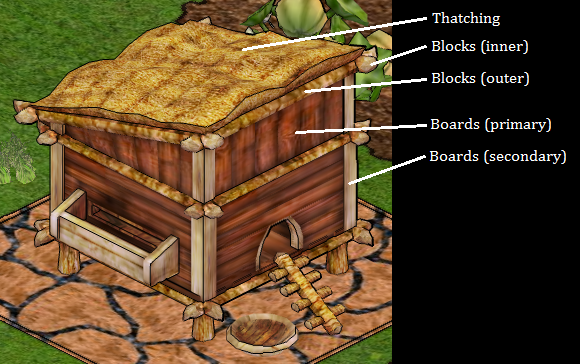