A Crab is a beach-dwelling crustacean that can be cracked for Crab Shells, Crab Meat, Crab Roe, and Crab Claws. It takes up a 2x1 space in the inventory when alive. They are found on Beach terrain.

Both picking up and cracking Crabs has a large chance to give you the Crab Carresed wound, causing 3-6 HHP damage per wound.

Crabs can be found commonly on beaches. They do not engage in combat and do not flee. You will need Hunting to pick up a Crab. Unlike Hedgehogs, it is not possible to engage crabs in combat to avoid the damage from picking them up, as there is no Dead Crab item (You simply crack them, which serves as killing and butchering them.) and killing them through combat/trampling with a horse simply deletes them from the game world entirely.

Wearing gloves, such as Poor Man's Gloves, reduce the damage, and chance at taking damage dealt by crabs. 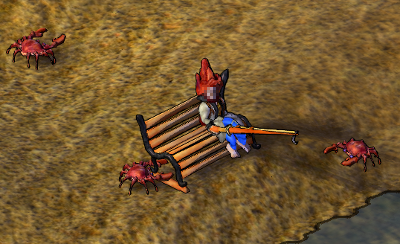