Ouroboros is a Curiosity which can be used in the Study Report to earn Learning Points.

Softcapped by Will, Sewing, and Lore.

Ouroboros - The self-devourer is a dragon eating its own tail, It's a symbol originating from ancient egypt, enventually finding its way into medieval european alchemy and magic symbolism. It most commonly refers to an endless cycle, revolving around itself, for example nature recreating itself, or the circle of life and death. 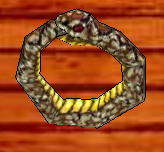 An ouroboros used as a wall decoration.