Damage can be calculated by the following formula:

The Unarmed Combat ability is a factor of MoveDmg, see combat moves for details.

The base damage of a basic Punch is 10. For a hearthling with a Strength of 80, their damage would be calculated by: 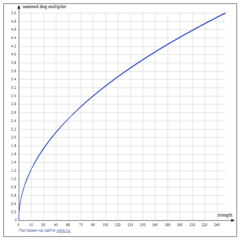 There are currently four types of moves in Haven & Hearth;

Each attack raises your opponent's opening of it's corresponding color.

Maneuvers are defenses against the attacks of your foe. The higher your corresponding stat, the more defense a maneuver will provide.

The following is an incomplete list of all maneuvers currently in the game.

Attacks are moves that inflict damage and/or increase openings on your opponent. Using an attack will cause a cooldown based off the listed cooldown of an ability. The attacker must increase the openings of a matching attack type before actual damage is inflicted on their HP. Having a higher agility than your opponent will make your cooldowns shorter, and your foes' longer. Grievous damage is damage done to your foes HHP. New moves are discovered via green highlighted combat discoveries while fighting certain foes, there also seems to be a level requirement to unlock some abilities.