Thus: If you have buried your ancestor entirely you inherit up to 45% of his stats total. Known skills are converted to their LP cost and inherited as LP. If you have already leveled beyond your ancestor when burying him, you receive no immediate benefit from the burial. Anyone can bury a skeleton, and the heir will receive the benefit regardless of who buried the ancestor. Smashing an occupied cairn will destroy the skeleton.

You may put flowers on the grave.

Note: to get the stats and lp from burial, you have to inherit by visiting the graveyard at character creation screen and clicking the "inherit" button before you burn in fire, spawning a new character. 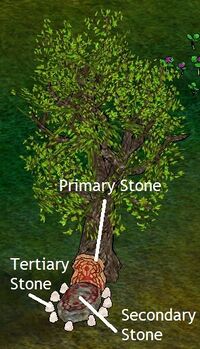 
Note: Its apparently not possible to have a different tertiary color, with the primary and secondary being the same color. (or having a different secondary color with the primary and tertiary being the same color).
It at least did not work when using 16ps+4t stones => (10p/6s)/4t.
The same principle is probably true for all builds that allow for more than 2 colors on a given material.
See Stone Mansion and/or Great Hall for the 'appearance' basics.