The Great Hall is a constructable building (similar to the Stone Mansion) which requires the largest amount of resources of any house, with a massive amount of space to match.

A Great Hall has three floors, with the first two being both 10x14, and the third being 6x14.

The types of wood and stone that are used to construct a Great Hall will determine which textures it uses. Up to five types of wood (two for boards, three for blocks), two types of stone, and one type of metal can be seen. More types can be used in construction, but will not affect the appearance thus helping to reduce the cost of the desired materials. Each section of the building will be colored by either the Primary, Secondary, or Tertiary material used, determined by how much of each was used.

All types of wood used to construct a Great Hall will use the interior color of its log, including blocks.

Material types are chosen for primary, secondary and tertiary slots by the first, second and third most prevalent types of the material. However, the subsequent materials must be at least 50% of the preceeding materials; if this is not true, then the preceeding type will fill the slot. 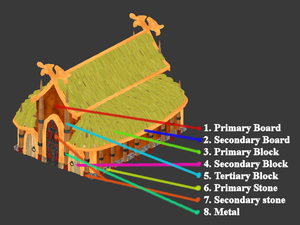 "... For more complex projects, on the other hand, several materials may be deduced from the same input slot; such as for the stone mansion, which uses three stone materials from its single stone slot. In these cases, the different stone types used are sorted according to prevalence, and the top three are used, but only under the condition that each subsequent material in that list is used at least half as much as its preceding material. If that is not the case, the last "common-enough" material is used for the rest of the stone materials.

On the other hand, if you build it from 150 pieces of gneiss, 75 pieces of granite, and 25 pieces of basalt, then then gneiss will be used for the first stone material, but granite for both the second and third, because while granite was used at least (in this case, precisely) half as much as gneiss and is thus valid, basalt was used less than half as much as granite, and is thus not valid, so only gneiss and granite are considered. If you were to build a mansion from 247 pieces of gneiss, 2 pieces of granite and 1 piece of basalt, then naturally gneiss would be used for all three materials."

A Great Hall needs a minimum flat area of 10x14 tiles, and is generally built on an 11x15 paved area. For help on how to flatten land and lay stone, see terraforming.

Like other houses, a freshly constructed Great Hall will start with very little soak, which will slowly increase to full over the course of 3 real-time days.