Terraforming is how a player sculpts the environment around his or her character. Virtually all actions performed can be considered, to some extent, to be terraforming. There are however certain terrains and biomes which are harder or impossible to terraform. For example, Mountains cannot be raised or lowered in height through digging or surveys. Forest biomes must be cleared of Trees and Stumps before you can build. the three tiles adjacent to any water biome cannot be terraformed.

Note: Certain actions, like raising or lowering land in particular, have some build-in edge checks that come with a directional caveat. Or, as some (unchecked) example, on the border of a claim: On might be able to raise/lower land on its North & East edge, but not on its South & West edge (without criminal actions active).

Clicking and dragging will select a area of a maximum of 31x31 to be leveled. Right clicking the flag will open a menu to adjust the desired height to level to. Stockpiles of dirt, stone, and ore within the survey will be used to raise the level of the ground after all necessary digging is done.

Cliffs can be removed by raising the cliffs-bottom until the cliffs height becomes less then 20 units.
An easy way to do this is by placing a survey like so: 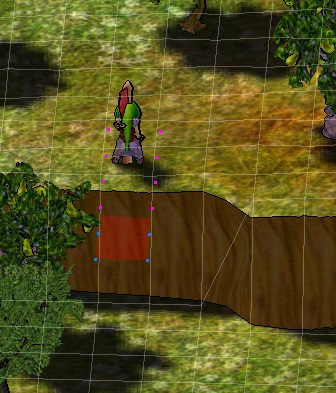 This command converts a tile into Grassland, this also works on Cobblestone. Each tile has a very small chance of spawning Grassland wildlife or herbs to forage.

Requires 5 seeds of any type (Plant-able non-seed objects such as Hop Cones, Carrots, Beetroots, and Onions do not work.)

The Dig command lowers the level of most terrain except beaches, mountains, snow and caves and generates a resource depending on the terrain.

Requires the Farming skill to perform.

This command turns normal ground into Plowed Dirt. This is only possible on Forest and Grassland Terrains. It does not work on swamps, mountains, mudflats, snow and beaches.

This command converts any eligible tile into Dirt

Much like Lay Stone, this command converts eligible tiles into a brick floor at a rate of 1 Brick to 1 tile.

Each type of Clay gives a different colour of brick when fired in an oven, and this is reflected in the color of the brick floor. Appear magical with a yellow brick road, or give off an imperial air with black bricks!

Much like Lay Stone, this command converts eligible tiles into a metal floor at a rate of 1 Metal Bar to 1 tile.

Much like Lay Stone, this command converts eligible tiles into a woodchip floor at a rate of 1 Block of Wood to 1 tile.