Note: As Trolls are so rare, much of this information could be incorrect or up for debate, as some amount of it is still from Legacy.

Trolls will beat their chest for at least 10 seconds after spawning, usually up to few minutes to give the player a chance to get away while they still can, however if a horse is in the range of the troll it can instantly aggro the horse and then the player. If troll can't reach you, he'll start using attacks that cause cave-in's.

Level 3 Troll - is the same powerful as Mammoth, but higher trolls are the strongest creature in the game. They can easily kill players due to the high damage amount of damage they deal and their cave-in attack which, if hit, will instantly KO the player. Trolls hit twice per attack, allowing them to do openings and deal damage even on the first attack round. 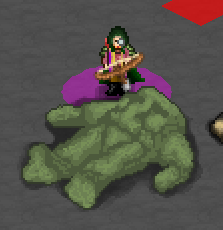