The Wrecking Ball is a powerful siege engine that cannot move, but instead must be disassembled, carried and reassembled (thus resetting the 24 hour drying period before usage).

After building a Wrecking Ball, it takes 3 in-game days (22.7 real life hours) for the glue to dry and make it usable.

After placing a Wrecking Ball right-click it to see if an option to Wreck is available. If this option is not available, you placed the Wrecking Ball incorrectly.

Unlike the Battering Ram, the Wrecking Ball does not require brimstone to build offering an inexpensive siege option at the cost of time. You have to build the wrecking ball so that the stakes (the wooden things on the legs) are facing your character when placing it. (See picture to the right or below for reference)

When placing the wrecking ball, you will have to hold shift+ctrl in order to move the Wrecking Ball closer to the wall. This is a must as you will not get a selection to "wreck" if the wrecking ball is not placed close enough.

First lift the wrecking ball, then right click on it. This will give you a ghost of the wrecking ball to place. But before you place it, hold down shift and ctrl and use the right or left keyboard arrow to rotate it so that the wedges are on the side away from the object you wish to wreck. You will need to hold down both shift and control at the same time as you click on the keyboard arrow.

If using a custom client, you can bring up the "bounding boxes view" (shift+B) in order to help you in placing the wrecking ball more accurately. From some angles the wrecking ball will appear to be placed overlapping on the object you want to wreck, and from others there will be a visible gap, so you may need to adjust the placement to put it down.

Visual of how to place the Wrecking Ball: 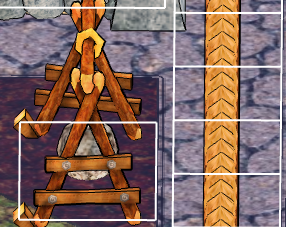 The base damage of the Wrecking Ball is a static 40 damage. Therefore, damage can be calculated as follows:

Only one person can operate wrecking ball at the same time.

Pickaxe or Sledgehammer does not help while using a Wrecking Ball.