This structure claims a large area (375 x 375) and creates a Realm. The claim put out by the realm does not prevent any crimes from being committed, but instead lays a "tax" on Experience Points gained by any hearthling who has a hearth fire active within the boundaries of the claim. The coronation stones drain 500 authority per in-game day. When initially built, the realm will have 5000 authority by default, and has a default cap of 250,000 authority (raised by constructing more Border Cairns.)

Destroying the coronation stone of a Realm not dissolves that Realm, but rather "only" reduces its authority to half, and prevents the Realm from earning further authority. The Realm retains its members, and any member with territory management permissions may construct a new coronation stone somewhere within the Realm's territory.

Coronation stones must be placed on a paved 8x6 area, and can be built within another realm's borders as a challenge. Once built, a hearthling wearing a Royal Crown can be sworn in as king. Once appointed, the king may set permissions, build realm objects, and oath or banish people in the realm. 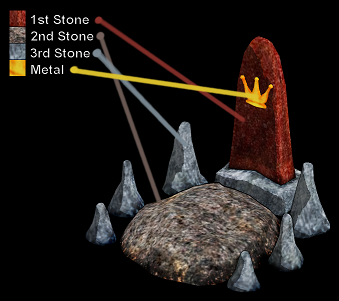