A Hearth Fire provides a place for your character to appear when logging in (if the place you logged out in is not accessible) and is used as a destination for fast travel when in-game. The color of the Hearth Fire's flame denotes whether the owner of the fire is online or not (bright green = online, white/pale green = offline).

Travel to your Hearth Fire

After a short hourglass, you will teleport to your Hearth Fire. Commonly referred to as "hearthing."

"Becoming knocked out now opens a small dialogue, giving you explicit choices on how to respond to the KO, with traveling to Hearth Fire being the pre-selected default." -jorb 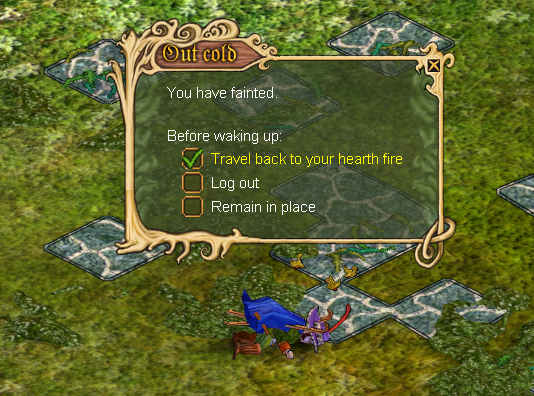 Following things prevent you from "hearthing" whether you are capable or KO:

Riding a vehicle does NOT prevent you from hearthing, but vehicle will be left behind. If you can, lift it and carry it while hearthing. Ridden Horse and/or pulled Cart will come with you after KO.

When sailing a ship and attacked by an another player you can't escape, drop the ship's slave key before being Knocked Out to prevent ship from being stolen.

All players can move through any Hearth Fire. (Unlike in early versions) Carts however can't move past them, and it has been reported that Wagons can become stuck in them, requiring Hearth Fire(s) to be moved (or destroyed in case of inactive characters) in order to salvage the wagon.