Haven and Hearth's character creation is more interactive than your regular MMO, making it more common to miss some important steps. 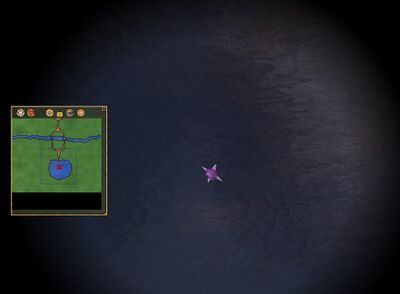 When creating a new character, you will begin as a small, nameless, shining ball with no tangible form. You are, for the time being, in a world that will fold in on itself upon completing your character's creation. You have free reign here without any consequences: if you need to, now is a great time to familiarize yourself with the controls and user interface. Feel free to make some discoveries and explore this pocket of existence. Nothing that happens to you (besides your hairstyle and hair color) will matter once you are properly thrown into the Hearthlands after the character creation is complete. Learn what you can, for you will soon be thrown to the wolves ... but don't linger too long, the wolves are much more fun.

Exit the pool to the north east (north on your minimap) and you will be greeted with a welcome message. You will know you're going the right way when you see a Stone Arch. 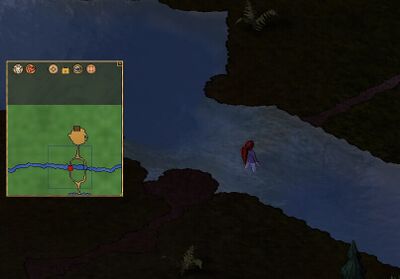 As you follow the path, you will receive another message telling you to choose between left and right. The message will make it clear that you are picking your character's gender by means of a forked road. Cross the river with the left path to incarnate as a female, and over the right for a male form.

If you get stuck with a message saying "You need the swimming skill to cross deep water", it's because you're walking into the edges of the deep water (deep water is a much darker blue than shallow water, whereas shallow water is closer to white in color). For now your character can only walk over shallow water. Being a floating orb can make this part tricky, but keep trying to position yourself in the very middle of the path you intend to take through the river. Click on the other side of the river to wade through, and behold your newly-born naked body!

Follow the path where the forks meet again to continue. You will find a small pool of water contained by stones. Right-click on it to choose your hairstyle and hair color. You may rotate the camera to get a good idea of what your hearthling will look like from many angles.

Keep in mind, you can change your hairstyle with a Dressing Table if you so wish later on. Your hair color cannot be changed, however!

Once you have chosen your desired look, continue walking down the path until you come to a clearing with a campfire, a wizard, and a small fenced-in area. 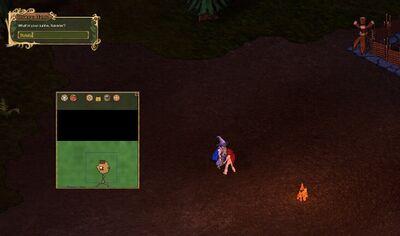 The Wizard urges that you choose your name. Right-click him and type your desired name into the textbox that appears. You can do this as many times as you want while you're here. Once you Right-click the Fire, you will be known to yourself as the last name you chose. You can always change your display name later via the Kith and Kin window, so others can see a different name than the one you chose with the Wizard.

You can pick any name for your character, even if another player has the same one, but you can't name two of your own characters the same name.

Your skull and grave will be named after the last name you chose. 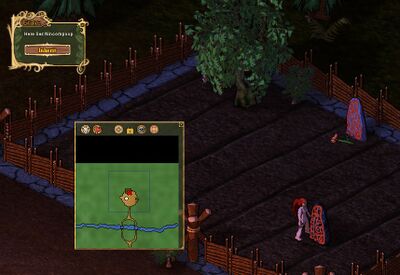 The fenced-in area is your graveyard.

If you have previous characters that died, they will have a gravestone here from which you can inherit. Right-click a stone to examine it, and click the Inherit button to pass on following to the new character:

Once again, you can change whose inheritance you will receive as many times as you want while you're here. It will only take effect when you leave. Presumably, if you change your mind and want to create brand new character without any inheritance, you need to restart the entire Character Creation process.

The text on the center Runestone reads "Deyr fé, deyja frændr, deyr sjálfr et sama". This text hails from an old Viking poem, meaning: "Cattle die, kinsmen die, you yourself die". The poem goes on to say: "I know one thing, which never dies: the judgement of a dead man's life."

This is a permadeath game, and death will indeed find you too. What matters is how you lived! 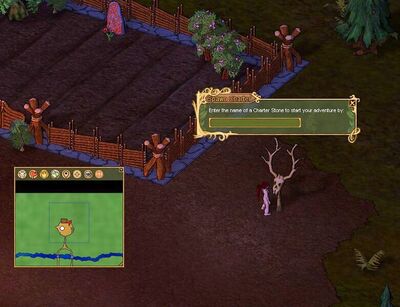 Instead of spawn somewhere in the world randomly you can set yourself to spawn at Charter Stone or Wilderness Beacon. To do it, you should know code phrase which was set up by other players when they activated one of these structures.

It`s suitable if you want start playing with your team in one place. Wilderness Beacon easy to build and it can be acquired very early in the game. 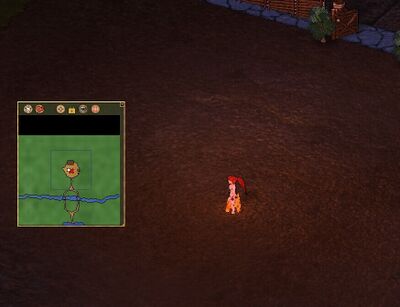 When you're done exploring and you've settled on a name, Right-click the Fire to be spawned into the game world proper.

Following section is most likely outdated as devs have improved the collision with the Fire.

Walking into the Fire, as with crossing the river, can be tricky for some. Your character has to essentially walk onto the fire, but sometimes it won't allow this to happen if you approach it at an odd angle. Walk backwards a bit if this happens and Right-click the Fire again. You may have to do this a few times for it to work. 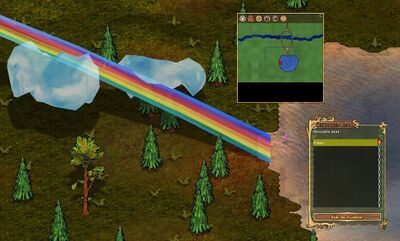 Valhalla is a mini-world with the sole purpose of doing battle. You can adjust your character stats with the available cheat sheet

, (or(?:unchecked) by feasting on a giant roast boar). You also have access to a host of weapons and armor that are scattered all around for players to pick up and use. There quality can also be adjusted.

You can enter Valhalla by right-clicking the rainbow on the west side of the starting pool, then select the character you wish to go as and click "Ride the Rainbow!". (No active character yet == No rainbow!)

Characters in Valhalla are saved after logging out, and you can revisit whenever you want.